Drink to Level Up

Walking 3125 kilometers for the sake of teammembers you may not even meet in your life at all and what do you get? A virtual badge. And not even a bronze, silver, or gold one. Noooo. Not even a platinum one. A black badge. The Urban Game Ingress gives players a Black Badge when they walk 2500 kilometers. Some people do it (Van Wilgenburg 2016, 38).

Walking off a cliff while looking at your phone or feeling the urge to run onto the highway. And for what. A Pikachu. It’s not even a good Pokémon. Or catching those bloody Murkrow that keep popping up. They don’t even evolve. You just want a badge that shows you caught 200 dark Pokémon. A badge that isn’t real…but is.

Over the past two years, or so my app has informed me, I have drunk over 200 different types of beers. I have the badge to prove it. Not sure if it should make me feel proud or ashamed. Granted, the badges have nice names, but should I drink beer to get fake badges. I’ve tasted some pretty bad beers (Looking at you Mahou)

I am an alcoholic and I can prove it

Or at supermarkets, buying enough or more in order to get stamps for oven dishes or, god forbid, space stickers. I will admit: I cheated. I found a box with all of the space sticker packages. I got my achievement without any skill or effort (read: money).

These examples are emblematic of the following symptoms:

If you recognize any of these symptoms, you may have come in contact with a bad case of Gamification. Don’t worry, I’ll try and possibly fail to make it seem like a good thing.

Gamification is this current buzzword in game studies, but also in advertising, corporate culture…basically everything where buzzwords and too-smooth marketers are a thing. It means “using game design elements in non-game contexts to motivate and increase user activity and retention” (Deterding et al. 2011, 9). It has even gotten so severe that “games and playful experiences are understood as essential components of society and culture” (Fuchs, Fizek, Ruffino and Schrape 2014, 7). Basically the idea is that using elements from games to structure activities. This can also mean that the activity is compared to play – as if you are playing. That’s nice and all but imagine your employer telling you that you’re just playing while you’re bloody well saving lives as a surgeon…

Whilst it’s not necessarily a bad thing – a bit more play in your job might actually be nice – the design elements from games are often simplistically used. It’s not like you get motion controls to do your job, or you get extra lives to spend when you get fired. No! Efficiency is what we want.

It sounds nice, to turn work into a game, but think real hard about it. What can you do in a game? Your actions are mapped to a series of buttons, but there are only very few games that have allowed to follow the following rhyme: 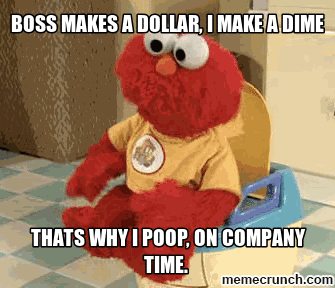 Instead, game design structures provide us with rules, an identified element of games from the beginning of theory (Huizinga, 1955). Rules that we can follow so we can score. Does score entail more pay? Nah, who needs pay? Does it entail benefits? Nah, that’s anti-social to your colleagues. Instead, you can rank in a leaderboard and gloat to yourself how you are better than your colleagues, or you’ll receive a virtual badge you can place on your desktop and look at for about five seconds a day.

Because although gamification is widespread it often occurs in the following shapes:

Basically they set limits for you to strive for and arbitrary levels attain. Making a game out of something does not work – some would call it bullshit even, a poor marketing trick by creating solutions to problems that weren’t there to begin with (Bogost 2011). Gamifiction structures behaviour with a variety of challenges with no material gain.

However, I am here to tell you that there is an example of it working well, and they don’t even know it.

I’ve spent a reasonable amount of time in Spain the past couple of years. It’s a nice country. They have this weird thing called ‘Sunshine,’  definitely worth a try, although it may hurt at times. They also have this weird time schedule where everything just happens two to three hours later. This may sound inefficient, but it’s actually not (shops also close later – imagine being done with work and still being able to go shopping). All that stuff is awesome, but that is not the functioning gamified aspect (although I’m sure they’ve tried). The Gamified thing that works so well is both stereotypically Spanish, but also very local. I am talking about Tapas in the southern city of Granada.

Tapas is the collective name for small dishes of food that can be purchased separately that together make up a meal. Usually some sort of meat, sausage, egg, or fishy thing (with or without bread, or – the best thing ever – picos). The name comes from tapar, which means ‘To Cover’. Why would a cover relate to food? Several explanations again:

Regardless of the reason, you can get small dishes of diverse food in Spain.

The Dutch version of Tapas is bullshit

Granada is a city in the south-southwest of Spain in the province of Andalucía. It is named after the pomegranate on its crest – a Granada in Spanish. The city has a rich cultural history, being the last stronghold of the Moors in Spain, hosting a blend of Moorish and Spanish architecture. It also hosts the Alhambra, a castle complex on a mountain, and it’s next to the Sierra Nevada, a snowy mountain perfect for skiing. 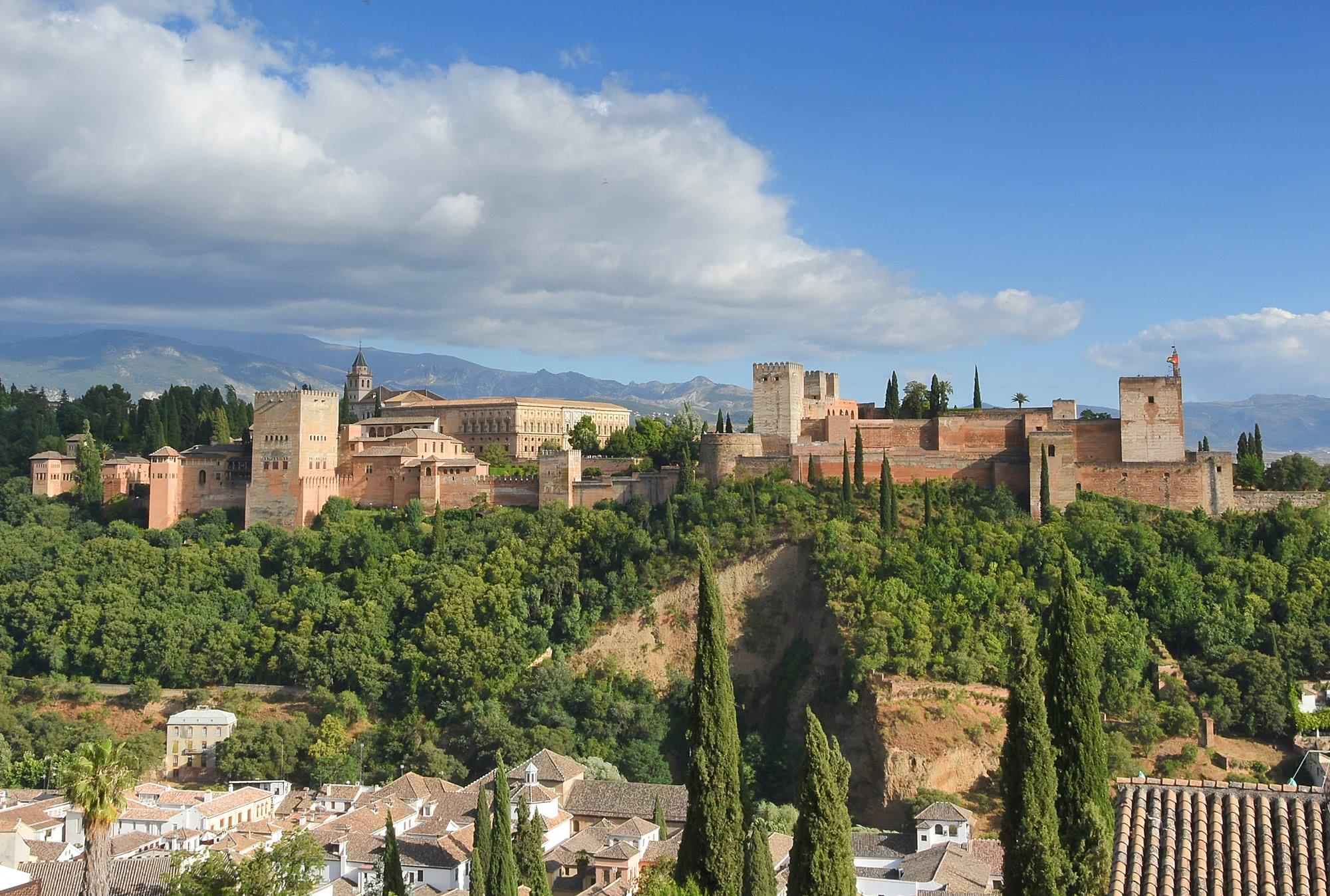 But Screw all that cultural stuff, we’re here to talk about games and food.

In Granada – and only there as far as I know – in the many, many bars in the city, when you order a drink – any drink, alcoholic or not – you get a tapa (not on your glass though, apparently that’s an archaic practice…). You usually can’t choose what you get, but you get food. For Free. More or Less.

Other cities will have combo deals – cheaper tapa with a drink – but Granada doesn’t fool around: You get food and drink. And everyone who drinks gets their own food. Nothing of that sharing-bullshit.

Now comes the gamey part. When you drink you get food. Awesome. But when you get another drink, you again get food, but different food (again, sometimes you can choose…). In most places, the tapas and the order is always the same. If you go out, the order is reset and you start from the first dish again. In one bar the first tapa is a mini hamburger with crisps on the side. The second tapa is a mini sandwich with grilled pork and olives. I don’t know what the third one is, these two things are proper meals already so I never stuck around long enough.

These kinds of Hamburgers

What does this have to do with games? One word: Levels. With every drink you gain a level. A level equals a food type. Can you handle more drink? Go up a level. Quitting? Game over, and now you have to start over. The introduction of this game design technique increases the efficiency of the drink sales. The element of uncertainty, seen as a key element of games (Costikyan 2013), when starting a new level – a new tapa – is partly what drives you forward. I am ridiculously curious to know what the third dish is in the bar I went to, let alone the fourth. Maybe there’s a boss at the end. The Tapa to end all Tapas. One can dream.

This level system also turns drinking into an agonistic – competitive – activity, according to Roger Caillois’ definitions (1961). Not competitive in the sense of a competition between players/drinkers. I mean it’s pretty clear that I’d own all of y’all in that sense. No, it’s a battle of skill. Agonistic games are usually based on the fostering of skill. Athletes can run, swim, wrestle, etc. really well – they got dem skillz. In Granada the player/drinker competes with the system. Does the player have the skill – in this capacity and money – to drink and eat on? Only those skilled enough will level up and enter the new rank of food. Those with failing skills will not taste the delights of the Spanish kitchen.

Does this gamified food/drink system work? I’d like to think so. It streamlines the drinking process by adding curiosity into the decision making of ‘shall I have another’. Furthermore, it fosters retries, to taste the good thing again or to see if you can get further. Finally, and here is where it differs from other gamification processes, it leaves a lot of freedom to the player. Instead of adding too many rules on how to play, the bars provide the structure. It’s up to the players to play in such a way they get the most and the diverse food. This fosters social contacts and sharing in a way – and unintended but very prevalent side-effects of games (Huizinga 1955). It also has its monetary value, as it turns out this drinking and free food which can be shared works really well for partying groups. Granada recently had a crackdown on Stag and Hen parties, which frequented Granada because of this (cheap) system, and in the process of leveling up were so noisy that they scared away tourists.

So Granada has things pretty well under control, and they didn’t even hire a clever marketing boi who told them games would be the answer. They didn’t look at gamification but still apply it. But what if they did? I have some suggestions to make it even more gamey. 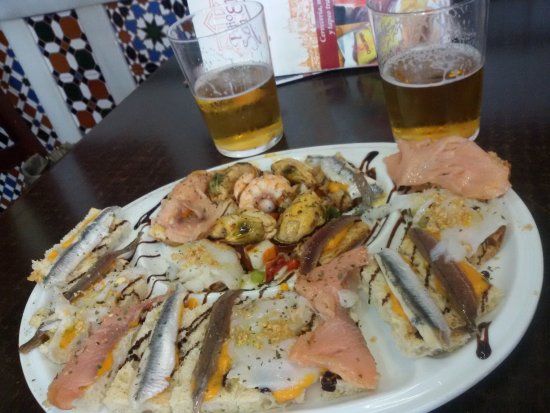 To be fair, all these ideas go against my critique of gamification. I impose game structures on a system that is not gamified before. People go to bars to drink and hang out with people, not to beat the Food system.

Let’s be honest, I’m not a businessman, so maybe they’re not economically viable, but they would make it more intriguing. Maybe this is why they won’t let me work in the hospitality industry

Caillois, Roger. “The Definition of Play, the Classification of Games.” [1961]. In The Game Design Reader: a Rules of Play Anthology. Edited by Katie Salen and Eric Zimmerman. 122-155. Cambridge, MA: The MIT Press, 2006.