I went to a theme park this week. Not to make you jealous, but I’m in a picture with both Spongebob and Patrick. Beat that. Theme parks are interesting places for they seem to be a completely separate world, accessible through a paywall. They offer amusement to anyone willing to immerse themselves in the newly created atmosphere. This egalitarianism is however threatened by a new addition to theme parks: the fast pass and their ilk. This post can therefore be seen as an angry, but argued, rant against this current development, spouting my frustration.

The Theme Park
How should we understand theme parks? What is so special about them and how does that bloody fast pass destroy their experience? To understand all this we have to look at the development of what came to be known as the theme park. Before Disneyland, before the Efteling even, theme parks were less theme and more attraction. Think Blackpool Pier or Coney Island. A pier smacked up with some rides and stalls, usually priced per ride.

While enjoyable in their own right these parks were often seen as dirty. Granted, being this close to the pier will result in a decent amount of gunk gathering around your park. But the dirty here had some political connotations too. They had (possibly still have) a strong Carney feel to it, which apparently makes it shady. Furthermore, they are frequented by young people and couples….by night. Oh good god, who knows what these kids might be doing. Loitering, Sitting, by god they better not be having fun with each other. But what made these parks especially dirty was their universal appeal. They were a fairly cheap source of entertainment, and as such everyone could join in. All classes, even those ‘filthy’ manual labourers. Walt Disney himself said these places were “dirty, phony places, run by tough-looking people” (King 1989, 119). No respectable person would want to go there now would they – they were clearly too rich for such low entertainment.

Then came Disney, or some dudes in the Netherlands, but Disney often is credited with the whole theming. He replaced the “risk taking, sense of danger, commercialism [HA!], salaciousness and morbidity … with safety, wholesomeness, patriotic and educational values [this is why we can’t have nice things]” (idem, 119). This should make the parks accessible to middle class – decent – folks as well. Especially families, because young people already have all the fun… He made all this happen by gathering all costs into an entry price and by making the parks enjoyable even without further consumption.

And of course, by theming. Anton Clavé argues that a theme must “facilitate the organization of a complex, recreational proposal around a single conceptual resolution” (2007, 32). Wait what? It basically means the whole park, or more often than not, sections of a park are given a continuous look or aesthetic that is reminiscent of a particular theme, story or time period – such as a Wild West area or a Fairy Tale Forest. This theming turned the park into what Clavé calls “a symbolic microcosm with a distinctive identity that proposes a complete emotional experience, a place of entertainment which has been provided with its own homogeneous semiotics” (idem, 21). In other words: theming turns a park into a world of its own you can step into with a completely different mindset than that adopted in daily life.

As long as you pay the entrance, you can step through the often literal gate into a new world – a World of Wonders, a Magic Kingdom, into the Movies, whatever – in which it is the sole goal to entertain you. (True, consumerism runs rampant, but according to Clavé this ultimately secondary to the creation of an amusing world). Everyone is now an equal visitor. Some can spend a bit more money on merchandise, but ultimately everyone can enjoy the ride and the world. The only people in this world who are more special are the characters and mascots inhabiting it. You can actually meet them here. Everyone can actually meet them here. A poor family want to take a photo with a princess? Go ahead. A women studies major hanging out with Gaston? Not unthinkable.

So yea, equality galore. Everyone is there to have a good time. We’re all in this together, except for the owners of course who make a shitload of money. But still, the experience is equal to anyone. Marx would be proud.

The Fast Pass System
Originally introduced in 1999 but really picking up speed around the late 2000s Disney, as always, overturned this egalitarian status quo. Fast Pass is a new system to regulate the waiting lines. The Disney version works by letting a visitor book a spot on a ride at a specific time. Come that time, they move to the special entrance of the ride, show their pass and skip a part of the waiting line, thus cutting waiting time. This is completely free, based on time planning and, most importantly, you don’t skip the line completely – just a large part of it. Sounds fine, doesn’t it. Yes. Yes it does.

But this system was soon adopted by many other theme parks. There’s the Flash Pass for Six Flags parks, the Express Pass for Universal Studios and the Speedy Pass for Movie Parks. It is especially the latter I have experiential issues with.

All these passes you pay for. The first two still work with a time system but can be used for multiple rides in the park (don’t know where you cut in line here). The latter, that infernal Speedy Pass, you buy and then you just march to some ride, at any time, show your pass and just skip the line entirely. Imagine you’ve just waited nearly two hours, you’re in front of the gate, and some lardarse comes walking up to the Speedy Pass line and gets to go before you, while he was standing there for less than a minute. That shit’s infuriating. Not to mention antagonising. I felt a deep loathing for these people. Now, I’m a grown man, I should be able to deal with such inequality. But I got really pissed when I saw a little kid, who had been waiting one hour to go into the Dora the Explorer Roller Coaster, all pumped up in front of the line, go totally sad because three other families could go first. That is unwanted sadness for a place that is supposed to amuse you.

There’s even multiple versions depending on how much money you want to spend.

So why does this piss me of so much? Do we have a theoretical explanation here? Sure we do.

Agonic Theme Parks
French cultural scholar Roger Caillois offers an explanation for this. Like Huizinga Caillois talks about play. Why again this play? What does that have to do with theme parks and infernal fast passes? I argue that fast passes change a generally equal visit to a theme park into a more limited and antagonistic sort of play than the sense of immersion into a fictional world. Caillois identified different types of play and the one we’re interested here is Agôn – simply put: competition. Caillois describes it as “like a combat in which equality of chances is artificially created, in order that the adversaries should confront each other under equal conditions, susceptible of giving precise and incontestable value to the winner’s triumph” (2006, 131). The key elements here are that groups are involved in a contest, each has an equal chance of winning but it’s their skill or actions that result in a singular outcome that makes someone the winner. This doesn’t sound like a theme park visit! Indeed. Allow me to give the model of a theme park visit as interpreted from Caillois.

A visit to a theme park can usually be seen as what Caillois calls paidia – “free improvisation, and carefree gaiety … uncontrolled fantasy” (idem, 130). This sounds more like a theme park. There are no rules, apart from standard safety. Instead, the player/visitor is free to imagine how they spend their day in this alternative world. Especially Disneyland or the Efteling caters to this – just build a fantasy through rides, who cares about anything else (well…maybe money…).

The fastpass changes this carefree kind of play into agôn – a contest; a contest you didn’t even know you were participating in. Following agôn standing in line becomes a race to the finish. Everyone partakes in this based on the simplest rule: first come, first served. The skill that determines whether you ‘win,’ i.e. enter the ride before others, is in whether you can run to the entrance quickest or know when to go to a ride (during lunch will see less people in rides and immediately after lunch is prime time for roller coasters for instance). Since you don’t really see the opponents and the stakes are not that high, usually this is not experienced as a contest. 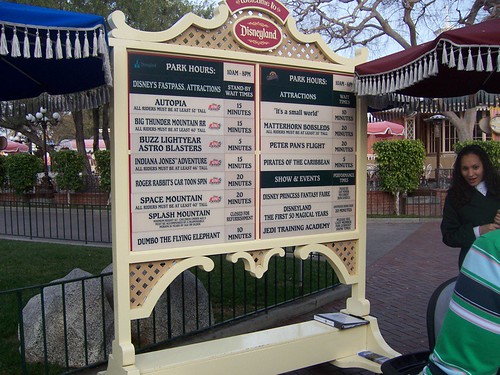 But then there’s the fastpass. Oh Boy. Remember that in agôn all have an equal chance to win? That gets screwed up. You’ve been gathering all you skill, waiting in line all the time, weathered everything – played the game properly – and then some asshat comes in, completely overpowered and beats you to it. The contest is turned into an unfair situation because of an explicit different starting position. The Disney Fast pass isn’t as bad. These players just utilise the system to skip a part of the line, but they still play the waiting game. The speedy pass though…they’re dicks. They pay money to win. They immediately overpower you and just skip the game to the finish line. This breaks the whole illusion of play and thereby possibly of the world of the theme park. It’s not about suspense of going into an intense ride anymore. Suddenly you’re occupied with ideas like: ‘Stupid Fast Passers, skipping line like that. That’s unfair.”

Indeed. Unfair. The waiting game is cheated based on its core function. Pay to win is the new standard. This is not a problem in places where this ‘inequality’ is systemic, like airports. There paying more will give you a different experience, but that is known from the start – you can prepare for that and basically play a completely different game. (You can also clearly see the person as different from you due to their ostentatious wealth…). But in theme parks, after paying the entrance fee, everyone should be equal. But with the speedy pass, people can take pot-shots at all times, creating an inherent inequality in visitors. The world is rid of its fantasy connotations for you to immerse in, for the same inequalities you encounter in daily life are pressed against you. Damn…

Maybe I’m just being butthurt from waiting too long. Possibly. I don’t want to bring Marx into here with class stuff, but this more explicit feeling of inequality and cheating is creating different kinds of visitors who apparently do not cohabitate theme parks well. The problem is that such class-forming is not only happening in theme parks. Other public places also get class systems. Next to trains also cinemas for instance. Seriously people? We have to flaunt our wealth around?